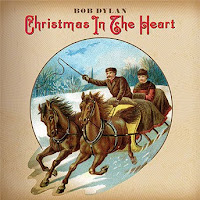 When I first heard about Dylan’s Christmas project, I must admit I thought it was a joke. But it proved to be true, and the official worldwide release is October 12th. Samples of all of the tracks on the record were probably by a mistake, available on the Internet September 17th. This preliminary review is based on these samples, not the CD.

First of all, Christmas In the Heart is not a new Bob Dylan CD. It`s a charity project. Dylan and the musicians do not get a single penny according to Dylan’s web site. The record does not include any original Dylan tunes. All the tracks are Dylan’s interpretation of traditional Christmas songs. The fifteen tracks are picked mostly from the American Christmas tradition and include songs like “Here Comes Santa Claus”, “Winter Wonderland”, “Have Yourself a Merry Little Christmas” among others. Hence, this is not a record for Dylan fans, which I believe tend to hate Christmas carols in general. The record is obviously targeted for the general public. The whole idea is to sell records, generate money and to give poor people free meals during Christmas. This is important facts to keep in mind.

In my opinion, Dylan has loosened up over the last few years: He has finally stopped fighting his own legend. He recent records exposes humor, irony and is more playful than ever. It`s like he is thinking that life isn`t that serious after all. Dylan`s inspiration from traditional blues, jazz and music hall songs from the 1920 to 1950 is obvious and manifested on “Love & Theft” from 2001 and “Modern Times” 2006. It`s also recognizable on his more bluesy 2009 effort “Together through life”.

In my opinion Dylan’s Christmas album is in an odd way inspired from the same tradition. It gives me a kind of Dylan meets Disney, Sinatra and Andrew Sisters feeling. Dylan has simply made a Christmas record true to a musical heritage from the forties and fifties. The arrangements have a traditional and somewhat old aged sound. The choir arrangements remind me of Disney’s “zippi du dua”-song. In fact, I never expected to associate any of Dylan’s work with that kind of music. Still it makes a kind of sense. American Christmas songs and records from that period sounded like that. He doesn`t try to convert them to Dylan songs. He just sings and arranges them in a way that is true to the songs musical origin. Still the album has a modern touch. The sound and production is terrific based on the samples I`ve heard. Dylan is singing nice. His rusty voice filled with patina and age makes a very interesting contrast to the in many ways well known arrangements. His voice gives a new and sometimes unexpected feeling. If Santa has a voice, Dylan is probably the closest we ever get to hear it.
Obviously Dylan had a good time in the studio. It’s a lot of energy in the band and in Dylan’s performances. The record is packed with instruments spanning from accordion, steel guitars to strings, bells and drums.

Despite the fact that some of the arrangements and songs definitively is not my ball game, I recognize an underlying quality in almost every one of them. It’s strange, but I feel Dylan’s genius comes true and I believe most of the songs on the record will grow on me. As a Dylan fan I think “Christmas Blues” and “Have Yourself A Merry Little Christmas” is the highlights of the album.

Releasing a Christmas album is in my opinion the most unexpected, weird and surreal thing Dylan ever has done. When Dylan decided to enter the snowman-reindeer–Santa Claus business – what could we expect? I think it is important to keep in mind that Dylan is singing these Christmas songs for charity and fun, not for creating another masterpiece. Many Dylan fans will claim that this is the worst Dylan record ever. I disagree. I think it is a hilariously funny record, based on good musical craftsmanship. Some of the songs express a kind of enjoyable madness. It works in a mysteriously way. I believe “Christmas In the Heart” will find it’s natural place in many people’s Christmas tradition, also among Dylan fans after the first shock.
This album is not a new Dylan record. It is a very funny and entertaining Christmas album from Mr. Dylan. He has made a classical Christmas album – in some way or another!